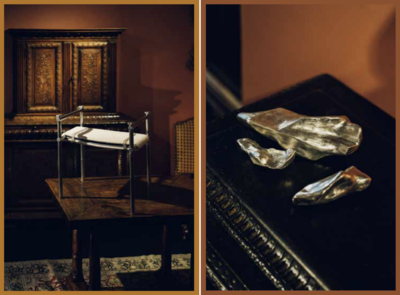 The Bishop’s Palace, at the heart of Toulon, contains in its very name the idea of a disappeared function. Having lost its episcopal purpose since the 18th century, then transformed into a school or a museum, this building is a testament to the impossible permanence while the walls remain. This impermanence highlights the very origin of the furniture, whose etymology includes the notion of mobility. From the Middle-Ages, the furniture has met a need for movement, as the courts were itinerant according to the conquests, wars, and seasons. The “movable property” was then a set of chests, tapestries that were stretched and unstretched and trestle tables that were “set” : a perpetual movement and an ambivalence between the robust feature of this furniture and its lightness. With this work, it is about restoring the lost function of this piece of furniture, recovering its origin to develop a space with the potential duty to perhaps leave it one day. If the itinerant man takes his dwelling with him, the bishop returning to the places seeks to surround himself with blessing, with a protection on the space he occupies. He then surrounds himself with artefacts and restores its spiritual dimension to this empty place.Basing on the connection between the sacred object and the domestic one, the artistic intervention by Victor Fleury Ponsin highlights the importance of divine protection when the architecture was just a roof.