President of the jury and guest of honour

Objectif Villa!
Immediate take-off from June 25 to September 5, 2021 at the Villa Noailles in Hyères.

Embark on an expedition in search of an unknown world: travel at light speed, landing on the planet Noailles, exploration of a fantasized universe.

Designed as a tribute to Marie-Laure de Noailles’ passion for astronomy and inspired by the contemporary exploration of Mars, this solo show invites to a sidereal discovery of objects in metamorphosis along a light and sound adventure.

The installation unfolds in five locations, depicting a journey in a mental space, from the landing on an unknown planet to its fictitious scientific rendition. This trip is an invitation to dream in low tech, to navigate between movie sets, by assuming the idea of an artificial scenography intended to transport the gaze and thought into the work of a designer.

After several personal exhibitions each time exploring a different angle of the designer’s work, the aim here is to invent an entertaining story where the imagination and its worlds become the central spring of creation. Thus, we travel in the squash as in a spaceship crossing a sea of meteorites, with a dashboard made of small objects diverted from their function. The sautoir becomes a working cabin, evoking the daily life of the designer. On the terrace, a decompression chamber allows you to drink a Martian glass. The gymnasium is a journey in thought through the restitution of the exploration of a mental universe. Finally, the swimming pool offers the possibility of landing on a planet made of finished objects, displayed in a colorful landscape. 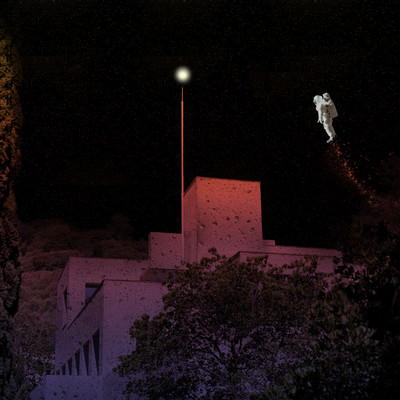